the morecambe and wise of foreign affairs

The fallout from the elections continues to rumble on. The latest squabble is about aid. A handful of countries are taking the opportunity to ditch their support for Nicaragua. The latest is Germany. The Nicaragua Network reported the comments of the German Minister for Economic Co-operation and Development, Dirk Niebel. As he pulled the plug he said

“The Nicaraguan regime must take the consequences of its ever more autocratic form of government.”

The German stereotype (which is totally unfair) of being humourless obviously does not apply to the ironic remarks of Mr Neibel. His comment is a joke worthy of the best stand-up. It comes from a representative of a German government who ,along with France, have demanded that countries in the EuroZone – Portugal, Spain, Italy, and particularly Greece – all ignore the wishes of their electorates, and savagely cut public spending. Why? Because German and French banks made reckless loans to these countries, and they must be protected at all costs. Germany’s commitment to democratic government was further demonstrated this weekend, with their proposal that a European Commissioner should be able to veto any budget proposed by the Greek administration (see here).

A wider sense of perspective was offered in the same report from the Nicaragua Network, this time by the President of the Finnish Parliament, Eero Heinaluoma, visiting Nicaragua last week. He said:

“The people of Finland have given much support to Nicaragua and…. we think that Nicaragua has the right to make its own decisions.”

According to NicaNet Heinaluoma added that while he hoped that Nicaragua would take to heart any recommendations from the EU concerning the electoral system, it seemed to him that the majority of the people of Nicaragua accepted the results of the elections and supported the government.

Heinaluoma’s comments echo a thoughtful piece by Dionisio Marenco, former FSLN mayor of Managua, and close confidante of Daniel Ortega before a serious falling out (see here). He details some of the failings of the electoral system and the CES (Supreme Electoral Council), many of which have been apparent for at least four elections going back to the mid 90s. But he also criticises the strategy of the opposition in the run up to the elections, and highlights the achievements of the Sandinista government for the poorest Nicaraguans.

And what of the United States, increasingly irrelevant but always dangerous? Hillary Clinton made various threatening noises about cutting back aid last week, as much a response to the Republican candidate race as events in the Nicaraguan elections.  Nicaragua’s Foreign Minister, Samuel Santos, delivered a robust reply(see Nicaragua Dispatch’s report here on his remarks).

There was also a contribution from “Freedom” House, a US think tank front for hawkish foreign policy (see here for a report, also in the Dispatch, and lively debate in the comments section). Nicaragua has apparently been kicked off Freedom House’s list of democracies, and is now ‘partly free’, sharing the classification with countries like Ecuador, Bolivia and Venezuela (is there some connection there?). What of Honduras, with it’s 2009 coup, siege election and weekly killings of dissidents? According to Freedom House all is well, a solid democracy and definitely ‘free’. Perhaps the jokers at FH should join Mr Neibel for a comedy double act.

Wales NSC’s David McKnight visited the Los Quinchos project on La Chureca (Managua’s colossal municipal rubbish dump) last week. You can see David’s photographs of the children from the project in the slideshow above.

David visited the project with Cardiff sisters, Kate Saunders and Maggie Barclay (and Maggie’s son Rob Thorburn of ‘Performers without Borders’). As many readers will be aware, we have been supporting the project for the past 4 years, raising over £25,000 to pay the salaries of the support staff who work with the children who live and work on the dump. Maggie and Kate have fundraised a large chunk of this, inlcuding monies from the royalties of Maggie’s books, two of which are about La Chureca.  See our post  from last year.

The Spanish government-funded initiative to clear the dump and create a recycling centre and new houses for the residents, trundles along slowly. Of the 220 houses promised, 50 have been completed and are occupied by former residents of the dump. However, upto 70 children a day continue to attend the Los Quinchos centre and it remains unclear as to when the centre will have to close. Carlos Vidal, a child psychologist and Director of the Los Quinchos project told David that he expects that the centre on La Chureca will remain open for another year. This means that we will have to consider whether we can continue to raise funds (currently we need to raise £450 a month). You can donate online here: http://uk.virginmoneygiving.com/team/walesnicaragua

Thanks again for all your support over the past four years.

the winds of change

Quietly, and without a lot of fuss and fanfare, Nicaragua is on the verge of a remarkable energy turnaround. This blog has detailed in the past one of the major achievements of the last Sandinista administration, the solving of the energy crisis within 12 months of taking power in 2007. Before this, powercuts had become a part of daily life. If it created uncertainty for big business, it almost wiped out small businesses, many of whom provided food and drink for Nicaragua’s population. Many saw their livelihoods literally melt away, as the cuts made what meagre refrigeration systems they had worse than useless.

Now Nicaragua is poised on the edge of another energy revolution. In a recent interview with Tim Rogers in the Nicaragua Dispatch (no cheerleader for the FSLN administration) Paul Oquist outlined Nicaragua’s plans to break the link with oil for electricity production ( see here). Nicaragua currently relies on oil for 70% of its electricity production. This will shrink to just 6% in five years time, with the renovating of its geothermal plants, the continued installation of wind generation, and the building of several large hydro-electric projects.

Last year several large windfarms went on-line. Nicaragua also connected it’s first existing geo-thermal plant to the grid (35MW), and is threatening to nationalise the second Nicaraguan geo-thermal plant, which can produce another 35MW, but is only producing 5MW, the result of mis-management and under-investment by a private company. A whole series of hydro projects have been anounced with international backing, including the Tumarin scheme (250MW, half the country’s electicity requirements), supported by Brazil and due to come on line in 2016.

Most of the hydro projects will need to be scrutinised carefully. Environmentalists have already lodged objections to some of the schemes, citing their impact on the water courses and the nature reserves which fall within the areas due to be flooded when the dams are built.

Nonetheless, taken with the Sandinistas progress on bringing electricity to some of the remotest rural communuities over the past five years, it represents a remarkable turnaround for Nicaragua.

Next month the Campaign hopes to interview Paul Oquist, special advisor to the President and leader of the Nicaraguan delegation in the climate change talks in Durban in December. 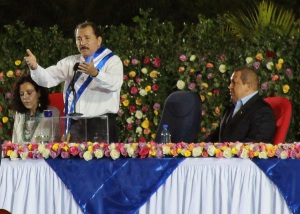 Two articles on recent regional developments in Latin America give a good summary of the quest for integration, and the politics behind it.

The first, on venezuelaanalysis.com, gives an overview of progress in the ALBA (the Bolivarian Alliance for the Peoples of Our Americas). “Chavez: Ortega’s Re-election is a triumph for Nicaragua” includes an interview with Campaign member David McKnight. He says of the ALBA programmes in Nicaragua:

“Ortega’s critics dismiss these as handouts but when you talk to people in some of the country’s poorest communities, as I have done, it’s clear that these programmes are making a real difference to peoples’ lives,”

The article also include’s one of David’s films on the ALBA, previously posted on the blog.

The second article is by Alex Sanchez, one of COHA’s most respected commentators. In “Placing CELAC in the proper Latin American context“, he gives an excellent, if sometimes sceptical summary of the development of CELAC – the Community of Latin American and Caribbean States. It includes a good description of the differences between CELAC and the Organisation of American States, as well as how it fits in with the alpabetti-spaghetti that is Latin American integration.

The new Wales Nicaragua Solidarity Campaign newsletter is just out. In the newsletter there are articles on: 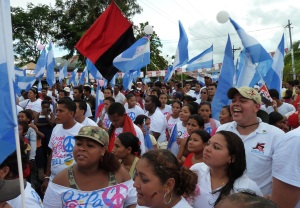 With the coming in of the New Year Nicaragua prepares to inaugurate its new President early in January. Meanwhile, the dust still fails to settle on the Nicaraguan elections, held on November 6. As we have commented before, much of the initial reaction from the mainstream media consisted of nothing more than rants, peddling the US line on the elections. This was no where better exemplified than in the US House Committee on Foreign Affairs on Dec 1, with a statement by Republican  Representative Ileana Ros-Lehtinen, playing to her Cuban exile crowd in Florida. Her statement – Democracy Held Hostage in Nicaragua: Part I (!) – went downhill from the title onwards (see here).

More serious analysis is now emerging, but still from two vastly different view points. The first, that the Nicaraguan elections were fraudulent, in both their preparation and conduct. An analysis eventually appeared from COHA on Dec 21, more than six weeks after the election results (see here). The Many Political Faces of Daniel Ortega, by Hannah Stone, touches briefly on some of the election controversies, but focuses more on the character and leadership of Ortega. Whilst many astute commentators have noted the contradictions in Nicaragua today, one of Ortega’s major failings according to Stone (and for many who went to Nicaragua during the 80s) seems to be that he has changed since the Revolutionary decade. In a reposte commissioned by COHA, which appeared the next day on Dec 22 (see here) Fred Morris in Nicaragua: The Other Side, concentrates more on the election process, answering many of the criticisms in the first COHA article.

A more detailed attack appeared in the November issue of Envio (see here), followed by more articles in the December edition. Envio has been detailing the contradictions of the FSLN government over the past five years, but has also been vociferous in its condemnation of Ortega and his ‘dictatorship’. Many of the points raised by the Envio piece are dealt with in an article (see here), by Daniel McCurdy, who has written some of the best analysis of the elections over the past two months. In In Defense of the CSE he deals with most of the main points of controversy – the size of the FSLN victory; the reports of international observers; the accreditation of voting centre observers (mainly from the PLI); and the failure to accredit national observers (including Etica y Transparencia), and the issuing of voter registration cards.

Despite the polarisation in the articles (in the best traditions of Nicaraguan politics), reading all of them will give a better idea of what are the issues, and what are the main arguments of both sides. What seems to be widely accepted is that the FSLN now command a majority of support from the Nicaraguan people.

And just to give some regional context, in another article – The US Double Standard on elections in Latin America and the Caribbean – by Daniel McCurdy last week (obviously a busy boy), this time jointly authored with Alexander Main, the pair contrast the Nicaragua elections with the deeply flawed Haitian elections last year (see here), about which the international community, including the US, were strangely silent. The widescale fixing led to the lowest turnout for any Presidential elections in the Americas since 1945 – twenty three per cent.

In an end of year post, Tortilla con Sal (see here) gives an up-beat forecast for Nicaragua for the coming year, contrasting with the continuing economic strife facing North Americans and Europeans.