traditional and ancient medicine in nicaragua

“The name of the revolution on the Caribbean Coast is autonomy. If you are working to create autonomy here you are a revolutionary.” Johnny Hodgson

Nicaragua has led the way in Latin America on indigenous people’s rights. As a response to the Contra war, and the greivances of indigenous people on the Caribbean Coast, the Sandinista Government passed the Autonomy Law in 1987.

In 2003 Law 443, the Land Demarcation Law, was passed, which recognised the communal land rights of Nicaragua’s indigenous people. With the new Sandinista administration in 2007, the demarcation process has accelerated. Out of 22 territories, 17 have already been through the process, covering 22,000 sq kms – more than the size of Wales.

Last month the autonomy process took another step forward. The National Assembly passed the Traditional and Ancient Medicine Law. The Welsh Campaign has kept an eye on these developments for over a decade, particularly through our links with the URACCAN, the Bilwi Clinic, and Dr Alta Hooker from Bilwi, who has done much to both record and develop the links between traditional medicine and Nicaragua’s national health provision.

You can read more about the Law here.

Nicaragua joins Bolivia in putting into practice indigenous rights, which exist on paper in many countries, but in practice are negligible. Bolivia recently presented it’s bill on the Law of Mother Earth (click here), a world’s first for recognising environmental rights and protection. It’s deeply rooted in the relations between the indigenous people and Pachamama (Mother Earth).

rice and beans and la chureca

“Try to think of this as a set of accounts. It isn’t in double accounting, with columns of debits and credits and a lot of numbers, however.”

So begins Maggie Barclay’s latest volume, Tuppenny Rice, which has just come out. Maggie and her sister, Kate Saunders, set up the Mayagna Children’s Fund. Over the three years of the Wales Nicaragua Solidarity Campaign’s support for Los Quinchos in La Chureca, the Fund has been the biggest and most consistent donor. Tuppenny Rice is an account of that support, though as Maggie says, you won’t find much talk of money.

Like her first book about their visits to Nicaragua, Rice and Beans, it details Maggie and Kate’s experiences, and the reasons why they set up the fund. See below for our review of Rice and Beans, which appeared in the Wales NSC newsletter last year:

……… Maggie Barclay’s book, Rice & Beans, introduces the politics by stealth. It’s the story of her family. Over the course of the book she and her sister, Kate, come closer together, thanks partly to their adventures travelling in Central America.

Maggie has already described her visits to Nicaragua in the Guardian’s “Letter from…’ column. The sisters will also be familiar to readers of the newsletter, as they have been major fund-raisers for the La Chureca appeal.

The book describes three visits to Nicaragua. They develop a link with a project that supports Mayagna children. They also travel into the Bosawas bio-reserve, which tests the endurance of both sisters. Whilst Maggie and Kate are not quite ‘Scottish Ladies’, they are not used to roughing it big time either. They have a guide through a friendship they struck up with a Nicaraguan from León, Rigo Sampson. Rigo is a constant throughout the Nicaraguan passages of the book, and helps them get an insight into the problems people face, espcially in the more remote areas of the country.

Maggie’s account of the travels in Costa Rica, Nicaragua, Guatemala and Honduras gives a good contrast of the different countries. She also captures the enthusiasm and curiosity of ordinary Nicaraguans.

She highlights the dilemmas that everyone who tries to offer support through solidarity projects faces – the differences in understanding about what are personal gifts and communal support; the too-high expectations, on both sides, of who you know and what can be achieved; and the need to be adaptable when, as invariably happens, things go wrong, or don’t happen at all.

Maggie also gets to the heart of the difference between the plague of back-packers that descend on Central America, and those struggling to build longer term links. After her last visit to Musawas, the most arduous in the whole book, she is relaxing in León, reading Orhan Pamuk’s Istanbul:

“….. and I turn back to his pages on what is ‘picturesque’ over and over again. He makes the point that you have to be an outsider to take pleasure in what he describes as the ‘accidental beauty of poverty and historical decay’.”

Rice & Beans is the story of how two “outsiders” try to get an understanding of what life is like for “insiders” in Nicaragua, and how they can develop long term support and friendships which go beyond most people’s experiences of ‘picturesque’ countries.

Rice and Beans is available from www.lulu.com, price £8.99.

One of the legacies of the Sandinista revolution has been the ability of communities and co-operatives to organise to tackle the problems they face. Even during the dark days from 1990 to 2006, there were still gains made in health, education and jobs, though it was a tough struggle.

The improvement in literacy and health since the new Sandinista government took office in 2007 have been helped by the willingness of volunteers – brigadistas – to give their time and energy to social projects. Similar efforts can be seen in communities all over Nicaragua.

One such project is Superemos in Esteli. The Foundation works with low income families on health and education. To read more about their work click here. Wales Nicaragua Solidarity Campaign member David McKnight has posted another video, about Superemos, on our YouTube channel.

FSLN i ennill yn Nachwedd? FSLN to win in November?

We can receive donations for La Chureca again over the internet. Please visit our appeal site to give.

An invitation from Johnny Hodgson

Johnny is a former Sandinista Mayor of Bluefields; a Development Co-ordinator with Ayuda de Accion in Kukra Hill; and one of those responsible for steering the development plan for the Caribbean Coast under the present Sandinista government. He, like many individuals and organisations we will talk to, have a wealth of experience to share, on autonomy, development and culture.

You will spend the first three nights in the capital, Managua, a sprawling, chaotic, vibrant city. You will have the chance to settle in, meet with community organisations, social movements and trade unions, to get up to speed on the country. 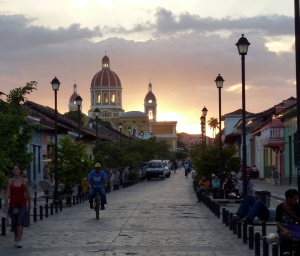 Then you fly to Bluefields, on Nicaragua’s Caribbean Coast. It’s a world away from Managua, much poorer but much more laid back. You’ll hear Creole and Spanish on the streets, with a smattering of Rama and Miskitu. You’ll spend five nights there, including a boat ride through the rainforest up to Pearl Lagoon. You’ll be able to see how people on the Coast are struggling for autonomy, as well as taking in visits to innovative community music and food projects.

Then it’s back to Managua for a night, and finally on to Granada for some relaxation. Granada is Nicaragua’s most picturesque city, with outstanding architecture, on the shores of Lake Cocibolca, and in the shadow of the Mombacho Volcano. You’ll spend two nights in Granada, including a day trip to the Pueblos Blancos or white villages of San Juan del Oriente and Catarina, where you can visit co-operatives of artisans and do some shopping for presents, and take in the spectacular view of the Apoyo volcanic lagoon.

You’re total cost for the fortnight is £600, which includes all accommodation, food and travel within the country. You will also have to pay your airfare – currently tickets are between £600 and £700, and we can help with booking.

We will also be organising a preparation day for the group before the journey. This will help you get the most out of your visit.

There’s no doubt that politics in Nicaragua can be tough, even Machiavellian. But the other narrative of the past four years has been the solid social achievements of the Sandinista government.

One of the most considered constructive critics during this period has been William Grigsby. His latest analysis, published in March’s Envio and summarised on tortilla con sal, lists the social gains, but also some of the things which have failed. Click An FSLN victory will permit deeper change. to read it.

It is a considered political judgment on the performance of the FSLN, and their prospects for the November elections.

His analysis is all the richer for him being a critic within the FSLN. It’s good to compare his latest article with his last contribution to Envio, in early 2007. Click You can’t organise people and raise consciousness by decree. It assessed the propects of the Sandinistas at the beginning of their term of office.

Envio, no friend of the Frente, should be praised for allowing the debate within its pages.